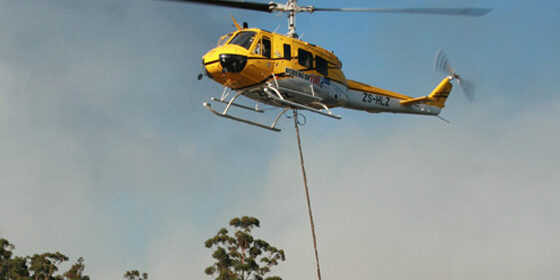 Governments’ Working on Fire (WoF) programme have fought and contained over 270 wild fires in the Western Cape since the start of December this year. The number of fires peaked in January with February, the hottest and windiest month, being quieter than expected so far despite lower than average rainfall.

Graham Barlow, General Manager of WoF in the Western Cape said on their website “We will keep all the ground teams and aerial resources (including helicopters and bomber planes) in the Western Cape on full alert. Some fires have proved to be very tenacious, with a number burning longer than a week, showing that conditions for runaway fires are still prevalent.”

Out of an estimated 37 811.6ha About 24 317.5ha of fynbos were hit by the fires, and plantations lost about 3 434ha. This does not include fires fought by local authorities, Table Mountain National Park fire authorities, Cape Pine fire fighters or SANParks without calling in the WoF. The province’s fire season officially ends on April 1, so we still have a way to go.

Fires take many resources to fight and extinguish. A small fire in Grabouw in January took for example six fire engines, four water tankers and 44 firefighters to fight and even then it was only the onset of rain overnight that extinguished the fire. Philip Prins of the Table Mountain National Park says it has become an expensive exercise to extinguish vegetation fires. A helicopter to douse the flames costs just over R20 000 an hour. An average of R10 million each season is spent on fighting fires in the Western Cape.

With the number and severity of fires on the increase, it is important that the fire fighting units in the Western Cape are well supported and that their capacity increases. A major problem that the governments fire fighting teams will soon be facing however is closely linked to Forestry and the decimation of a large part of the managed plantations in and around the Western Cape due to a policy that should have been reversed years ago.

Cape Pine, the company that manages the bulk of the plantations in the Western Cape have been forced to cut down large tracts of forest and naturally regenerated pine plantations due to the exit policy that would have the land returned to the community / to Cape Nature. Oddly enough the plan is to eventually reverse the exit policy, but the industry says that may be too little loo late.

“At the moment the IDC (Industrial Development Corporation) are advising DAFF (Department of Agricultural Fisheries and Forestry) on the way forward. Approximately 50% of the exited areas will eventually be returned to forestry. Unfortunately Government does not seem to understand the urgency of the situation, having dithered for seven years already. In our own Grabouw region, Cape Pine who have the lease from DAFF for these exit areas, are harvesting extremely efficiently and are probably two years ahead of where they need to be. There will be no plantations by 2017/18. If none of the regenerated pine is allowed to remain in the areas going back to forestry we will sit with a waste land in 2020 with no locally grown timber available in the Western Cape,” says Pieter Silberbauer from Rustic Homes, a company that builds luxury timber homes using locally grown timber wherever possible.

Historically, fire fighting and forestry go hand in hand. Cape Pine have a large fire fighting force to deal with forest fires and work hand in hand with WoF to extinguish fires in and around their plantations.

“At the moment, we have Cape Pines’ fire-fighters and Working on Fire. Both have performed extremely well in the recent mountain fires in and around the Grabouw area. However as Cape Pine withdraws, the total responsibility will be left to Working on Fire and Cape Nature. Without a long-term sustainable industry such as forestry, this will become a financial burden to Cape Nature and the Government in the future,” says Pieter.

What’s more as the plantations are clear-felled, piles of cut down trees and saplings are left to dry out and become kindling and fuel for veld fires, exacerbating the situation even more.

For more information on the exit strategy please visit: